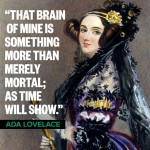 Back before 1440, the majority of the world didn’t read and write. Then Johannes Gutenberg invented the printing press, and now, according to the UNESCO, more than 80% of the adults worldwide can read. Some people claim that Programming is the new Literacy, as being able to code is become a requirement in many of today’s research fields and jobs. Dr. Mohamed Fayad, who teaches in San Jose State University, believes [Ar] the Software Industry is the only hope for developing country like Egypt to have a competitive edge worldwide. In the Open Data movement, programmers are need to scrap and liberate governmental data. Their hacking skills are also need to analyze and visualize such data.

One problem here, is that the current curriculum in the Egyptian schools doesn’t teach children how to code. Another problem is the digital divide between males and females. Even though a woman, Ada Lovelace, is considered to be the first computer programmer ever, surveys indicate that less than 12% of Computer Science bachelor’s degrees were awarded to women at US PhD-granting institutions in 2010-11. To tackle those two problems, Rails Girls initiative was born in Finland. It is now a global non-profit volunteer community and they are going to run their first two day workshop for women in Egypt by the end of this month.