Yesterday, February 22, was the International Open Data Day (#ODD14), lots of participants joined from Egypt and collaborated online and offline to enrich the event.

Days before the event, different Egyptian organizations started to collaborate and arrange for the day. AFTE, SITC and ADEF wrote on promoted the event on their websites. S3Geeks made great effort spreading the word in Upper Egypt by holding an offline event. LibreBooks called their fans to help in translating content to Arabic, while ECESR was interested in opening data related to economical and social rights.

The participating parties were able to spread the news widely, and many local and Arab newspapers wrote about the day, such as Al-Masry Al-Youm, Masrawy, Youm7, Ahram Gate, AlGareda, Arabia.io, Mandara Online and Al-Modon. Global Voices Online also wrote about the day both in Arabic and English. 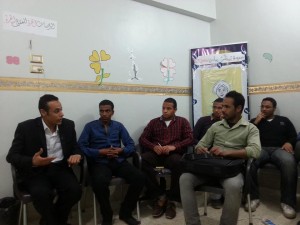 The Association for Freedom of Thoughts and Expression (AFTE), created a video for the Open Data day. The video was widely shared on the hashtag, and S3Geeks started their gather by showing the video to the attendees.

Although he passed away last December, the words of Ali Shaath, the co-founder of the Arab Digital Expression Foundation (ADEF), were there during the day. Ali Shaath was an early believer and advocate for Openness and the Freedom of Information.

Tweets came from netizens and organizations throughout the day. Some prefered to raise the awareness about the importance of Open Government Data, while others discussed their previous experience trying to get some datasets from the government for their professional and personal needs. An aggregation for some of the tweets coming from Egypt can be seen here. Mohammad Tayseer prefered to participate with code instead. He wrote a script to scrape traffic status data from an online crowdsourcing application.

Phoebe Saad and Emad Mubarak had a side discussion about the governmental entities such as the Central Agency for Public Mobilization and Statistics (CAPMAS), and how they deal with the data they produces, and how they excert a sort of monopoly on producing or publishing any statistical information through the article number 10 of their Establishment and Organizational Law.

The Egyptian Center for Economic & Social Rights (ECESR) decided to focus on Open Budget and related topics. They also published a handbook about the Egyptian Government Budget and the stages it takes it to be issued. ِAFTE also issued a research paper under the name, Towards Liberated Knowledge. Mostafa Hussein shared a draft Freedom of Information law written by EIPR, AFTE and SITC.

Finally, the buzz on twitter was enough for the Egypt’s Minister of Communications and Information Technology, Atef Helmy, to send a couple of tweets and a Facebook update in support of #ODD14, and to salute the efforts of S3Geeks.

One thought on “Roundup for #ODD14”