The American University in Cairo (AUC) organized a two-day event between April 27 and 28, under the name Open Access Days. The organizers highlighted that their aim is to promote open access to researchers in Egypt and the Middle East, and to plant a seed for future initiatives. Thus the sessions varied between those raising awareness about the topic, panel discussions and other technical sessions introducing the audience to softwares like Open Journal System (OJS) and the university’s Digital Archive and Research Repository (DAR Repository), which is open to host the university’s theses, faculty publications, student projects, and departmental records and publications.

“Open access publications are easy to access and theoretically accessible to anyone with an Internet connection”, Mark Muehlhaeusler

On the event’s homepage, the term Open Access is highlighted as it refers to “literature and research that is digital, online, free of charge and free of most copyright and licensing restrictions”. Nevertheless, Meggan Houlihan and Mark Muehlhaeusler felt the need to start by explaining the term in more details in the first session of the event. 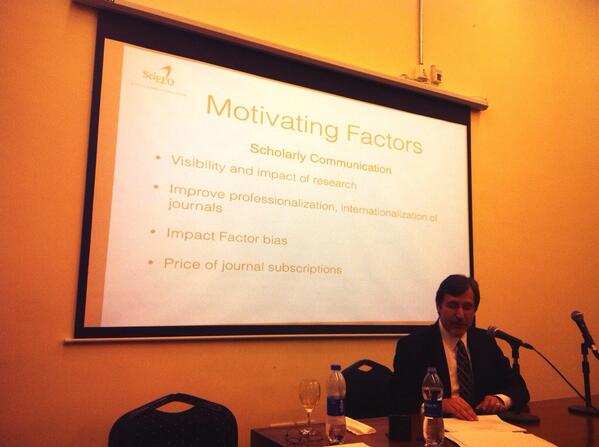 In the next session, Nicholas Cop from SciELO (Scientific Electronic Library Online), gave an introduction their bibliographic database of open access journals. SciELO initially started in Brazil, 15 years ago, yet it now have presence in 12 countries most of them are in Latin America and the Iberian Peninsula. Mr. Cop also shed the light about the status of Open Access in that region by showing some statistics. For example, in Chile, 88% of the journals are Open Access ones. Similarly, in Brazil, 63% of the articles there are OA. On SciELO’s blog there is also a study about academic journal publication models in Brazil and Spain. SciELO is meant to make it easier for anyone to search in all the member OA journals from one place. They also noticed that the language barrier for researches done in Spanish or Portuguese are limiting the access to the papers published in the OA journals there, thus they translate the papers’ abstracts. Mr. Cop also spoke about a new project they are working on to promote OA books and to allow ways for easier citations between papers and e-books.

Later on, Iryna Kuchma of Electronic Information for Libraries (EIFL), spoke about 4 more projects and case studies. She started with EIFL, a not-for-profit organisation that works with libraries to enable access to digital information in developing and transition countries. Their Open Access program focuses on building capacity to launch open access repositories and to ensure their long-term sustainability, and empowering librarians and library professionals, scholars, educators and students to become open access advocates. She then introduced three other projects, OASPA, COAR and NDLTD. 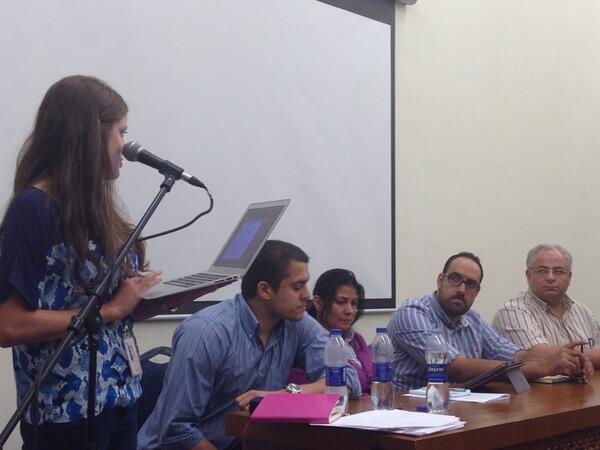 The next session was a panel discussion that focused on the state of Open Access in the Arab world. The panel was moderated by Nadine Weheba and Ramy Aziz, and there were 5 panelists, Seif Abou Zeid from Tahrir Academy, Hala Essalmawi from Creative Commons Egypt, Ahmed Hussein from Open Egypt, Mandy Taha, an open access consultant, and yours truly from Open Knowledge Egypt. Seif spoke about their aim in Tahrir Academy to make university courses as well as other educational and skill sharing videos available to everyone for free. He emphasised on the importance of adopting an open license, such as Creative Commons, as opposed to many of the existing MOOC websites. Hala Essalmawi then moved to the legal aspects of OA, and how they worked in Creative Commons Egypt, not only to translate the license, but also to adapt it to the Egyptian laws. She also highlighted the positive and negative aspects of the Egyptian IP laws, and their relations to the OA goals. Since Open Egypt advocate for the use of Free and Open Source Software in Egypt, Ahmed Hussein went on to make analogies between Open Access and Open Source, how the culture of sharing and openness has helped the latter to develop in the recent years. He then called for building directories for OA journals in the region. Then, during my talk, I prefered to draw a picture about the status of OA in the region through some numbers. Then I highlighted the importance of OA, not only to make the access to research results costless, but also to make it more accessible. I used the language barrier as an example to show how the lack of free license may prevent people from translating existing researches published in foreign languages. I then had my share of analogies, by comparing OA to Open Data, and how openness here doesn’t stop at the legal aspects, but it also has to provide technical openness so that not only humans can read the published researches, but also machines for data analyses and search engines. There were discussions among the panelists and with the audience about the concepts discussed, and the case studies shown from the region. One of the discussions was taken home by Maha Bali after the session, where she continued the discussion on her blog.

Right before the final session of the day, Ramy Aziz of PLoS, showed how he encourages his students in Cairo University to blog about what they study. He also highlighted how Open Access and scientific blogging can fight pseudoscience and help researchers follow new studies in their fields. Then in the final session of the day, Ryder Kouba presented the AUC’s Digital Archive and Research (DAR).

I wasn’t able to attend the second day, but from the feedback on twitter, it was clear that the panel about copyright was interesting. Later in the day, Maha Bali had a session about Open Education Resources, and the session was followed by a workshop by Mark Muehlhaeusler on Open Journal System (OJS).