In the week of a major international summit on government transparency in London, the Open Knowledge Foundation has published its 2013 Open Data Index, showing that governments are still not providing enough information in an accessible form to their citizens and businesses.

The UK and US top the 2013 Index, which is a result of community-based surveys in 70 countries. They are followed by Denmark, Norway and the Netherlands. Of the countries assessed, Cyprus, St Kitts & Nevis, the British Virgin Islands, Kenya and Burkina Faso ranked lowest. There are many countries where the governments are less open but that were not assessed because of lack of openness or a sufficiently engaged civil society. This includes 30 countries who are members of the Open Government Partnership.

The Index ranks countries based on the availability and accessibility of information in ten key areas, including government spending, election results, transport timetables, and pollution levels, and reveals that whilst some good progress is being made, much remains to be done.

According to the World Bank, access to information and public engagement mechanisms in MENA are among the weakest in the world. This year’s Open Data Index is the first assessment of openness of fundamental government data in the region. The Index includes full scorecards for six countries (Israel, Tunisia, Egypt, Saudi Arabia, Bahrain, Yemen) while partial scorecards for Morocco and Lybia were for now removed. 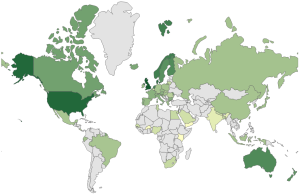 Opening up government data drives democracy, accountability and innovation. It enables citizens to know and exercise their rights, and it brings benefits across society: from transport, to education and health. There has been a welcome increase in support for open data from governments in the last few years, but this Index reveals that too much valuable information is still unavailable.

The UK and US are leaders on open government data but even they have room for improvement: the  US for example does not provide a single consolidated and open register of corporations, while the UK Electoral Commission lets down the UK’s good overall performance by not allowing open reuse of UK election data.

There is a very disappointing degree of openness of company registers across the board: only 5 out of the 20 leading countries have even basic information available via a truly open licence, and only 10 allow any form of bulk download. This information is critical for range of reasons – including tackling tax evasion and other forms of financial crime and corruption.

Less than half of the key datasets in the top 20 countries are available to re-use as open data, showing that even the leading countries do not fully understand the importance of citizens and businesses being able to legally and technically use, reuse and redistribute data. This enables them to build and share commercial and non-commercial services.

The six countries from the Middle East, featured in the Index, globally show very low openness. Israel, Tunisia and Egypt rank among or close to the average-open countries. Bahrain and Yemen are among the 10 least open countries worldwide showcasing perfect enclosure of fundamental government data. Egypt’s data is often available online, but is rarely in a machine readable format and is never openly licensed (as per the Open Definition). Jordan, the only Mid-Eastern country having joined the Open Government Partnership, is unfortunately absent due to lack of contributors. 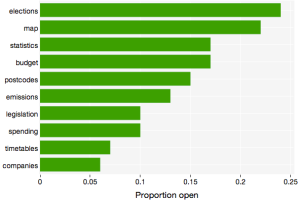 Proportion of countries in which each dataset is “open” according to the Open Definition (public, machine-readable, and openly licensed).

For the true benefits of open data to be realised, governments must do more than simply put a few spreadsheets online. The information should be easily found and understood, and should be able to be freely used, reused and shared by anyone, anywhere, for any purpose.

Open Data is information which can be freely used, reused and shared by anyone, anywhere, for any purpose. Truly open data demands a range of both technical and legal qualities which ensure that anyone can reuse it freely, for maximum benefit, and the Open Data Index assesses all of these. The Open Definition sets out the principles which define “openness” in relation to data and content.

The Open Knowledge Foundation is an international non-profit working to open up information around the world so it can be used to empower citizens and organizations to build fair and sustainable societies.

The annual summit for the Open Government Partnership will take place in London on 31st October to 1st November. More details at: http://www.opengovpartnership.org/

Rayna is a writer, researcher and Open Knowledge France board member. She has a PhD in genetics and informatics, a BA in property law, and is currently researching a Masters on how technology can be a tool for governance and the impact it exerts (or not) on populations in post-conflict zones.